A letter from a cynic about Writing Exercises…

“Writing Exercises to Get You Moving!” When I read these kinds of blog headlines, I do get moving…to another article or another blog. I’m already aware that I’ve lost half of the readers this post might have had, if only I had started it another way.

I simply don’t want to hear it anymore. I remember college, the chore of the writing exercise. Then, later in life, I remember all the time wasted with books aimed at teaching the art of writing better through creative activities. And now, with the Internet as a platform for the skilled and unskilled alike, so much of what I read about writing exercises is fodder—written by people who can’t seem to earn a living with literature, but still feel they can advise others. Too harsh? Maybe, but I don’t want my writing advice from a professional educator, waitress, or musician—at least not at this point in my career. I want writing advice from professional writers, editors, and publishers — people who demonstrate their knowledge by earning a living with literature — it’s not their hobby, it’s their livelihood. These are the artisans from whom I want to learn the craft.

Fighting words? Not really. I freely admit that many other people have good things to offer. When it comes to articles about writing exercises, perhaps I’m lazy and cynical. I don’t want to decide whose voice is credible. I’m frustrated by most blog posts about writing exercises because so many of them smack of a motivational speaker that lives in a van down by the river. That said, their cliché slogans have a certain kind of truth, hence the appeal that made certain ideas cliché – “Just write something, get the pen moving, don’t overthink it, oil the wheels, spark your creativity….” Yes, obviously, there is truth there — a kind of mantra for the writer – but like anything that’s said too often, it’s little more than background noise, undeniably present, yet widely ignored.

My thoughts about writing exercises? Not everyone needs a personal trainer. If exercises help you, then incorporate them into your routine. Enough said. And if you are writing beyond college, or at least regularly, then you probably already know all you need to know about writing exercises – you can ignore articles about them in the future. For those people who don’t like exercises, you’re not wrong.

I reluctantly admit that this post is cynical fodder, but since you committed to reading this far, I’ll push this advice on you, from someone who does make a living with literature; keep writing. Just keep writing. That’s all. Trust me. You’ll get better with or without writing exercises. Fail better until you stop failing. Stop looking for advice about writing exercises. Go write something. 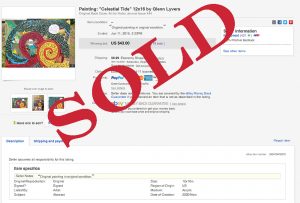 I’m not a million dollar artist, yet I’m thrilled that I sold a painting. Be happy, friends, with whatever comes. If you’re creating art, let that be your primary reward. I’m grateful for the bidders, and so pleased to be able to enjoy the artistic journey.

Some Thing in the Bed

There is a long window that doesn’t open
overlooking the parking lot. In its
recess, a black leggy thing, weightless
and still, lays on its side. It is
to fly as the thing in the bed is to
my mother — holding only the shape
and none of the spontaneity. She too is
weightless, buoyant in the heavy air,
adrift in familiar halls — fourteen
disbelieving eyes stare at a shucked husk.

What do you dream about, blind man? Voices
coming from below the ground, long canes,
longer than the world is deep?

Do you imagine you have experienced sight,
a great salty yawn spilling cracked oysters,
each unique odorous texture a vision?

I wish you would wake and tell me your dreams,
in words sufficient enough to remove my vision,
forever in the way of what you see.

Thank God for the Rain

Four years old — allowed
to wander the length of the dock
to the end, where I was,
a stranger in blue
looking across the water
waiting for something—a twinge
against the tightness of green
braided line extending in-
to the slippery heavy.
I saw him before, the day he fell
hard on the planks, tripped on his own
dog. He sat down beside me
until he heard his mother
from the shore, hollering,
“come now, Joshua, now before the rain
catches you.” He stood, too close,
the way kids do sometimes, asking,
“You remember the day I fell
right here?” pointing
the smallness of his fingers
to a scar leftover on his chin.
“My dad left that day. He said
he’ll be back in three days.
How long is three days?
Nobody will tell me.”

Annie Lebawits shot him,
Jagger shirtless—elevated
from man to Rolling Stone.
If he were any other man
we’d say he looks skeletal
today, but he’s still going,
doing it, with his lips
pressed out, Tumbling Dice.
He is as Annie showed us,
frozen in time, shirtless
forever singing Wild Horses.